75% reduction in CO. Only through CFD modeling were engineers able to achieve such reduction, which allowed a variance request to reduce ventilation rates saving the owner several million dollars over the life of the building.

A transient study was completed which showed the exhaust fumes from a helicopter planned for the new Children’s Hospital during an approach and landing.

Multiple transient wind wake studies were completed to aid the engineers in determining potential for re-entrainment and public health for various exhaust stacks. 360 degrees of incoming wind (in ten degree increments) were analyzed and plotted against exhaust concentrations at intakes. 3D visual output was used to observe the concentration of exhaust in all public areas surrounding the MOB. Very detailed exhaust stack geometry was drawn into the model to give realistic exhaust throw from the stacks that simple stack geometry cannot accurately accomplish. 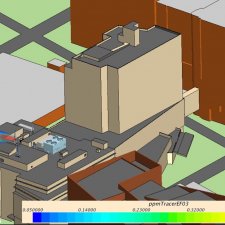 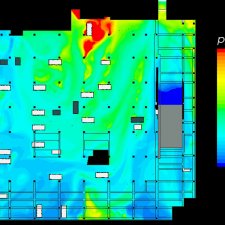 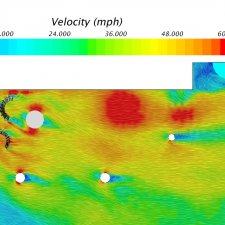 University at Buffalo North Campus
Stadium Lighting
Have a question or want to discuss a project? contact us